3 Ways to Welcome Someone Home with Flowers

Bienvenido, willkommen, ahlan wa sahlan, shalom or aloha; words of welcome are some of the sweetest any language has to offer, and even more so if they are welcoming a person back home. If someone you love has been away, the occasion of their return is a joy that will be anticipated and celebrated and there are several great flower choices that will help you communicate just how great it is to see them. The following flowers work well in a bouquet brought to greet them at the airport or in a vase left in the most wonderful place of all- their own front door. 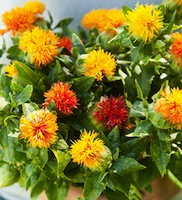 Safflower
An odd step-cousin of the sunflower, the brightly tufted safflower is a striking bloom that represents “welcome” in the language of flowers. Its tall, straight stems are topped with a perfectly round, green flower head from which sprouts brightly colored petals in either yellow, reddish gold or orange. One of humanity’s oldest cultivated crop, safflowers were used by early Egyptians to dye cloth. The plant is grown commercially for the oil from its seeds, which is used in cooking and a variety of other products. The flower, however, is prized by florists for its tall, straight stems and ability to add a certain wildness to any mix of blooms. Mix several safflower blooms with orange or yellow alstroemeria, green hypericum berries and some sunny zinnias for a cheerful welcome home bouquet. 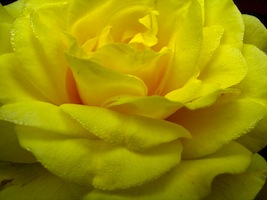 Yellow Roses
The iconic symbol of coming home, the yellow rose has been featured in folk songs, poems and American film and has come to represent the longing one feels for the familiar. There are many different varieties of yellow roses available from florists year round, but in 1830, and actual cultivar named “Yellow Rose of Texas” was created by attorney (and amateur plant breeder) George F. Harisonin New York City. Originally named the “Oregon Trail” rose, as it was naturalized from a wild rose found along part of the Oregon Trail, but took on the “Yellow Rose of Texas” title just a few years later by growers after the Texas War of Independence, from which the folk song arose around the same time that this rose became popular. Present a vase or bouquet with a yellow rose for each day, month or year they were gone to let them know you were counting the minutes until their return.

Pineapple
Okay- technically a fruit and not a flower, the exotic pineapple has deep associations with both hospitality and welcome. Presented to visiting guests or returning friends as far back as the 18th century, the gift of a pineapple can be seen represented on wrought iron gateposts and entryways in the South, where it has long been a sign of greeting and welcome.

3 Ways to Say Thank you With Flowers

The Right Flowers for a New Home