4 Charming Floral Imports from China to Celebrate the New Year

Today is the official start of the Year of the Sheep!
With one of the oldest human cultures in the world, the Chinese New Year tradition is the most important of the year and is celebrated by millions of people around the globe. Based on a lunar calendar and lasting for 15 days, many people travel home to be with family, eat special food and attend celebrations with fireworks, performances and friends. If you want to start the Year of the Sheep off on the right foot, consider decorating your home or bringing a gift of one of these important flowers that were first cultivated in ancient China. 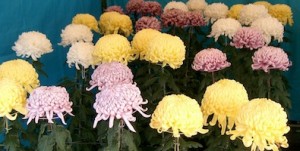 One of the most revered flowers of the Song Dynasty, there is evidence that the mum has been cultivated in China as far back as the 15th century BCE. Depicted in paintings, pottery and fabric art, the mum became a flower associated with several different holidays and in the Chinese culture and was an important export to other parts of Asia where it shows up in everything from traditional flower arranging to soup. A popular flower both in gardens and in vases, there are hundreds of different sizes, shapes and colors of chrysanthemums to choose from these days. Consider choosing the frilly Fuji or spider mum for this occasion, which has long, trailing petals surrounding wide center. Hardy, inexpensive and available year-round- it’s easy to find one that fits for this New Year celebration.

Roses
While the hybrid tea rose is right at home in and English garden, the first cultivars of today’s modern rose came from careful breeding of the wild five-petaled rose found in China. The whole rose family, Rosaceae, which contains many commercially (and culinarily) important plants such as the apple, pear and strawberry, all have east Asia as their center of origin.

Surrounded by myth and legends, this spring-flowering phenomena of a plant is said to symbolize riches and honors. The peony is considered to by one of the longest-used flowers in eastern culture and many cultivars have been created over the years and exported around the globe. The large blooms are a profusion of petals in white, pink or magenta. Consider just one or two stems to bring in the new year and welcome spring. 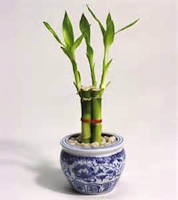 While technically more of a grass than a flower, the stalks of bamboo have a long and important history in China. Used to build everything from aquaducts to bridges, this plant provided material that helped to build civilization. Now retired to more of an ornamental role, there are a variety of sizes and shapes to choose from. Easy to care for and tolerant of low-light conditions, a few stems of bamboo will grow all Year of the Sheep long.

Celebrate the Harvest Season with a Floral Cornucopia

Celebrate the Rose for New Year’s