A Flower that Only a Botanist Could Love

Beautiful colors and luscious fragrances – we must be talking about flowers, right? Not so fast! There is a bizarre species of flowers that neither look nor smell pretty. In fact, they literally stink.

Perhaps the biggest and worst offender (in the world!) is Amorophallus Titanium, also known as titan arum. With an odor like the smell of a rotting flesh, the titan arum is characterized as a carrion or corpse flower. Now how cheery is that!!!!

Native to Sumatra, Indonesia, titan arum grows in the wild only in the equatorial rainforests. But it has made its way to botanic gardens and greenhouses around the world where it has been given names like Morty, Audrey, Fester and Putrella.

Not just stinky, but super-sized

The corpse flower holds the record for the world’s largest unbranched inflorescence (cluster of blooms on a stem) and can reach heights up to 12 feet in the wild. Cultivated corpse flowers run smaller, ranging anywhere from 6 to 8 feet. The stem of the plant typically weighs about 110 pounds. It feeds on soil, air and water.

In cultivation, the corpse flower can take years or even decades to bloom. It seems that each botanic garden has its own unique growth tale to tell. When it gets close to blooming, the plant’s bud grows several inches a day before slowing down. After its initial blooming, there can be considerable variation in blooming frequency – from another seven to ten year cycle to as little as every two or three years.

Lime green on the outside with burgundy on the inside, the corpse flower has a ruffled collar called a spathe that encircles the central stalk or spadix. When flowering happens, it’s over quickly. The spathe unfurls, revealing its blood red inner coloring. The spadix then starts to generate heat. Then comes the stench.

The flower’s colors and foul smell are meant to replicate a dead animal. That attracts dung beetles, flesh flies and other carnivorous insects, which are the pollinators that will ensure continuation of the species. Once the flower has bloomed and pollination is complete, the flower collapses. But it does not die.

From Pungent Plant to Fruit-Bearing Flower

If pollinated, the plant will produce hundreds of small, golden-colored, berry-like seeds which are eaten and dispersed by certain birds and animals. Once the seeds ripen, the corpse flower goes dormant and the life cycle starts again.

Due to the threat of deforestation in the Sumatran rainforests, the corpse flower is now classified as “vulnerable.” If factors threatening its survival and reproduction don’t improve, it could become endangered. The good news is that blooming events for cultivated corpse flowers are still generating news and big excitement. 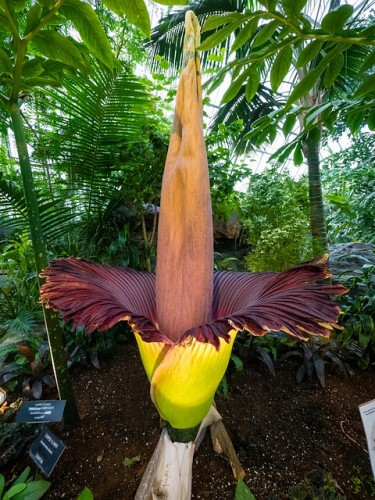 Article Name
A Flower that Only a Botanist Could Love
Description
Beautiful colors and luscious fragrances – we must be talking about flowers, right? Not so fast! There is a bizarre species of flowers that neither look nor smell pretty. In fact, they literally stink.
Author
Phyllis S.

Send Love With the Lilac Flower

Flowers that Love the Rain

The Right Flowers to Say “I Love You”