A Gift of Irises Sends a Regal Message

Irises are a popular cut flower, often found in mixed arrangements with roses or lilies. They are also quite striking on their own. Dating back several thousand years, the iris flower has long been associated with both royalty and heaven.

Irises are named for the Greek goddess Iris who was said to travel to and from the heavens on a rainbow. Since ancient times, Greek people have planted these purple flowers on the graves of loved ones to appeal to Iris to lead the departed to heaven. The ancient Egyptians similarly connected the iris flower with divinity and the journey to the afterlife.

More recently, iris has become the birth flower for the month of February. It is the traditional flower for the twenty-fifth wedding anniversary. Iris is also the inspiration for the French royal symbol, the fleur-de-lis.

If you wish to send a message of hope and trust to a loved one, irises are an excellent choice. If you want to give a gift that will last for years to come, consider irises to plant in the garden.

Irises are known to be low-maintenance and easy to grow. There are varieties that will thrive in a broad range of climates and almost any growing conditions.

There are as many as three hundred identified species of irises, varying in height, petal formation and methods of growth and propagation. Different types of irises bloom from early spring to late summer, providing brilliant colors throughout the growing season.

The Siberian iris is native to eastern Europe and central Asia. The narrow leaves have been compared to grasses and the colors are primarily in the blue to violet family. They frequently display a white stripe or veining in the petals.

Flag irises are semi-aquatic and thrive in very damp soil conditions. Some flag irises are mistaken for Siberian irises, and vice versa, due to similarities in the formation of the petals. Flag irises range from dwarf varieties to those reaching 3 feet tall.

Commonly found in shades of purples, yellows, and white, rock garden irises are petite in size. Most reach only 4 to 6 inches in height. They bloom in early April and coordinate nicely with daffodils and crocuses that bloom at the same time.

Bearded irises have a raised “fuzzy” patch near the base of the downward petals, or falls. Blooming later than many other varieties, bearded irises are among the most prevalent types of iris found in many gardens today.

Whether you opt for cut irises or perennial plants for the garden, the gift of an iris sends a regal message. Irises are a divinely inspired token of affection. 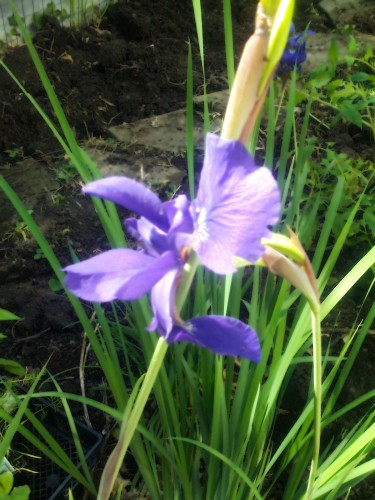 Article Name
A Gift of Irises Sends a Regal Message
Description
Dating back several thousand years, the iris flower has long been associated with both royalty and heaven. Irises are named for the Greek goddess Iris who was said to travel to and from the heavens on a rainbow.
Author
Margarette M.

Daffodils Mean a Gift of Sunshine

Iris, the Rainbow, for Faith, Hope and Wisdom