Bird’s Foot Trefoil: A Strange Twist Of Fate That Provided A Cure

Lotus corniculatus, commonly known as bird’s foot trefoil or birdfoot deervetch, is a herbaceous, flowering herb in the pea family. It is native to Europe, temperate regions of Asia, and North Africa. The plant was introduced to North America by colonialists and is now a common sight in the US.

By now, you are probably wondering if the plant has any connection with birds due to its English name. Actually, the name is derived from the similarity of the seed pods on its stalks to a bird’s foot. Sound strange?

Well, lotus corniculatus is never short of curious facts. In the language of flowers, bird’s foot trefoil is one of the few blossoms with a negative connotation as it symbolizes retribution and revenge.

Basically, there are three varieties of bird’s foot trefoil: erect, semi-erect and prostrate. The erect types are commonly used for hay purposes while the prostrate varieties are used for grazing. Semi-erect types can serve both purposes and occur more commonly compared to the other two types.

All varieties of the plant are very hardy and can survive heavy grazing, close mowing, and trampling. They also tolerate poor soils compared to most plants, however, they dislike shaded areas.

Lotus corniculatus contain tannins that are known to boost the absorption of proteins in the small intestines. However, it is important to note that bird’s foot trefoil has cyanogenic glycosides, which turn into hydrogen cyanide when macerated. In spite of this, the plant is rarely toxic to humans because the plant has very little concentration of these toxins and the human body tends to metabolize cyanide very fast.

Bird’s foot trefoil flowers from June to September. During this period, it brings forth yellow or orange, scented blossoms that form clusters at the tip of the stalks. The strong scent of the flowers attracts pollinating insects including bees as the blossoms are an excellent source of nectar.

Bird’s foot medicinal properties were discovered by Henri Leclerc, a French herbalist in the 19th century, by mistake. The herbalist had prescribed an eyewash made from sweet clover (melilotus officinalis) to a woman for treating conjunctivitis, heart palpitations and insomnia due to a nervous problem.

The woman mistook bird’s foot trefoil for sweet clover. She made an infusion from bird’s foot trefoil and drank it. In spite of her mistake, she got healed of her nervous condition within 7 days. An intrigued Leclerc studied the plant and started using its infusion to treat people suffering from nervous disorders.

While the discovery of bird’s foot trefoil medicinal properties was purely accidental, today, the plant’s healing qualities are neither accidental nor in doubt. 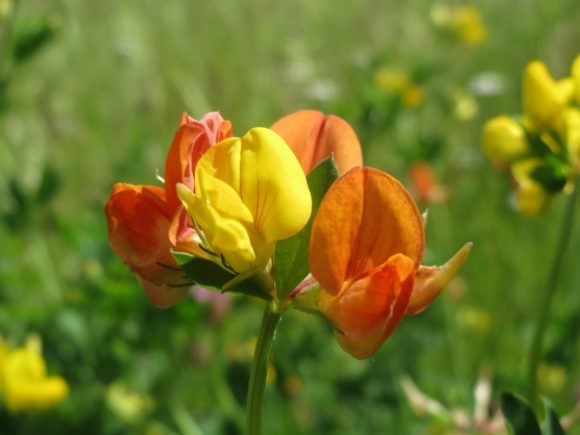 The Lotus Flowering Plant: More Than Meets the Eye – It Also Has Health Benefits

Cool Desserts with a Floral Twist
Comments: Comments Off on Bird’s Foot Trefoil: A Strange Twist Of Fate That Provided A Cure Posted by: Florist Ephy Categories: Beneficial Properties of Flowers