Heal-all, self-heal, woundwort, botanically known as prunella vulgaris is a flowering herb native to Britain but now grows in most parts of the world. The plant thrives in open spaces and among short grass on waste ground.

[Note: The Right Flowers is not a medical site. Knowledge of and
information about the therapeutic benefits and applications of
flowers, while known through the ages, does not constitute medical
advice. If you are having health issues, you should consult with a
physician.]

The plant brings forth closely-knit purple flower heads from June to September. Since the herb grows close to the ground, its flowers are often spread over a wide area forming a beautiful carpet. The blossoms are arranged around spikes and rarely open at the same time.

While all parts of woundwort have been used for generations as a medicinal plant, its leaves and flowers are usually the parts used in supplements and for medicinal purposes. The plant was identified as an herbal remedy by Dioscorides, the renowned Greek physician who recommended it for treating tonsils and throat inflammations.

Today, scientists are busy exploring the possibilities of woundwort alleviating some of the most troublesome infections in the world. Studies have shown that self-heal holds the potential of treating HIV. According to these studies, the plant contains compounds that are active against viral infections, especially HIV. A particular study focused on a sulfated polysaccharide known as prunellin and found that this naturally-occurring compound in prunella vulgaris inhibited HIV-1 reproduction in-vitro. It was also shown to stop transmission of the virus in cells without causing adverse effects.

In addition, the plant is known as the following health benefits:

Management of diabetes
Prunella vulgaris is known to contain compounds that help in managing diabetes. According to studies conducted using rodents, researchers found that the plant contains chemicals with the ability to inhibit enzymes that metabolize carbohydrates in the body. This leads to a reduction of blood sugar levels and better control of diabetes.

Possible treatment of herpes
Prunella vulgaris has been cited as a potential treatment of herpes simplex virus. This viral condition is characterized by contagious blisters around the genitals or mouth. According to studies, the plant contains compounds that block the reproduction of HSV cells, which effectively stops the development of the condition.

Apart from blocking the reproduction of the HSV virus, heal-all is also effective in fighting against herpes by activating cells in the immune system such as macrophages which assist your body to fight against the infection.

Anticancer
Heal-all shows a lot of potential in inducing the death of cancer cells. According to studies conducted in test tubes, the plant contains rosmarini acid, caffeic acid and other chemicals which act as antioxidants and help in protecting against cell damage caused by reactive substances known as free radicals. These molecules are linked to cancer development.

One specific study in human liver cancer cells showed that heal-all inhibited the proliferation of cancer by stopping the production of enzymes that promote the growth of cancer cells.

Though not a very popular herb, this is one of the few plants that hold a lot of promise in alleviating many diseases and conditions plaguing humanity. 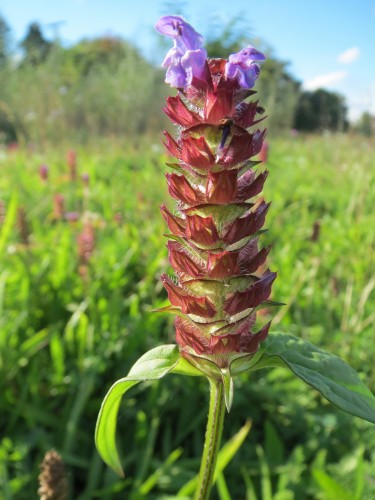 Article Name
Heal-all: A potential cure for HIV?
Description
Heal-all, self-heal, woundwort, botanically known as prunella vulgaris is a flowering herb native to Britain but now grows in most parts of the world. The plant thrives in open spaces and among short grass on waste ground.
Author
Ephy

How To Heal Yourself With Wild Garlic
Comments: 0 Posted by: Florist Ephy Categories: Beneficial Properties of Flowers