Set Your Garden on Fire with Gloriosa Superba

With a scientific name like Gloriosa superba, you might say that this fiery beauty is superb in color and full of glory. And you would be right! Perhaps that’s why it’s so rich in descriptives. Common English names include flame lily, fire lily, climbing lily, creeping lily, glory lily, gloriosa lily, cat’s claw, tiger’s claw, and Rhodesian flame lily.

Whatever name you use, this plant is a stunner with showy reddish orange/yellow flowers that look like flames, and shiny green stems and leaves. The leaves are narrow and usually taper to a short tendril at the tip. The tendrils cling to other objects and help the plant climb up and scramble over other vegetation. Flowering occurs on pedicels or stalks up to 7-1/2” long from May to October. Though the showy flowers are lily like, these plants are not true lilies.

Gloriosa is a genus of 12 species in the plant family Cholchicaceae. They are tender, tuberous rooted deciduous perennials, adapted to summer rainfall with a dormant dry season. All parts of the plant contain colchicines and related alkaloids which makes them toxic if ingested and fatal if consumed in large doses. Small doses of colchicine are used in traditional medicines in both Africa and India, as well as pharmaceuticals in the U.S. Skin irritations can result from contact with the stems and leaves. Clearly not a plant you want to have around small children or pets.

The genus is found in Africa, the Arabian Peninsula, and from the Indian subcontinent in Malaysia. The national flower of Zimbabwe, Gloriosa superba is widely naturalized in coastal Australia, where it is considered a rampant and dangerous invasive weed. It is also considered a noxious weed in some Pacific islands and parts of the United States.

How to Grow Your own Gloriosa Garden

While propagation generally occurs from seeds, mature plants can be divided and grown from tubers. Outdoors, tubers should be planted horizontally 2-4” deep and 8-12” apart in organically rich, medium moisture, well-drained soil after the last frost date. These plants do best with some afternoon shade. Because the tubers are brittle and difficult to dig up, many gardeners leave the tubers in pots or containers year-round. They work well as houseplants in a bright sunny window, with watering tapered off after blooming to induce dormancy.

The plant also produces fruit, which are large fleshy capsules that turn from green to yellow and eventually dark brown. These fruits contain numerous large, rounded, or ovoid shaped seeds. There are several named cultivars, including Citrina, which is yellow with maroon stripes, Lutea, which is all yellow, and Nana, which is a dwarf form. One brightly colored variety called Gloriosa Rothschildiana was named after the second Baron Rothschild who is credited with bringing the flower to Europe from Africa.

Bulbs are sold on Amazon and Plants Delight Nursery, and you can find seeds on Etsy. Here are the links: 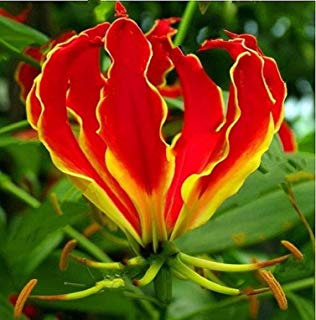 Article Name
Set Your Garden on Fire with Gloriosa Superba
Description
With a scientific name like Gloriosa superba, you might say that this fiery beauty is superb in color and full of glory. And you would be right!
Author
Phyllis S

Flowers to Companion Plant in a Vegetable Garden