The Long History of Snapdragons as Cut Flowers

Snapdragons have been a popular cut flower for thousands of years. Snapdragons have long been highly regarded for both their beauty and the legends that accompanied them.

Snapdragons have multiple delicate blooms on long, slender stalks. These blossoms are said to resemble the elongated snout of a dragon. They can be made to “snap” by gently pinching the sides of the flower.

Snapdragons are available in a wide range of colors, including shades of yellow, red, and pink. There are numerous hybrids that have blended colors on each flower. They are also categorized by the height of their stalks, which can range from four inches to four feet tall.

There is a long history of folklore surrounding these flowers. Originally found growing wild in the Mediterranean region, the ancient Greeks and Romans believed that snapdragons would protect them from witchcraft. Ancient Germanic people hung snapdragon flowers near the beds of babies and small children to keep them from being afraid of evil spirits.

In early Greek society, people wore snapdragons around their neck to ward off anything negative that they might encounter. Ancient European castles would often have snapdragons planted near their gates to offer an additional level of protection to the occupants.

In the Victorian era, snapdragons were full of hidden meanings. A gift of these flowers could mean that a marriage proposal was imminent. On the other hand, they could also represent deception. Snapdragons were even hidden within the layers of one’s clothes to make them more beguiling.

Popular in the United States since Colonial times, snapdragons have recently been bred to have blooms resembling butterflies or azaleas. Though not found in cut bouquets as frequently as they used to be, snapdragons remain a common flower for annual garden plantings. When stalks are pinched back after the flowers are spent, the plant will bloom vigorously for the duration of the growing season.

While the flowers themselves are not edible, a cooking oil can be made by pressing the snapdragon seeds. This oil has been compared to olive oil and is sometimes whipped into a butter. It is common in Russia, where snapdragons are cultivated specifically for this use.

The leaves of the snapdragon contain an anti-inflammatory agent that can be used as a topical remedy for irritated skin. They are also sometimes used to create a green dye for fabrics.

Whether you are gifting snapdragons as a cut flower or as a garden plant, the long history of these flowers makes them full of meaning. Not only can snapdragons tell a story, but they are bright and beautiful as well. 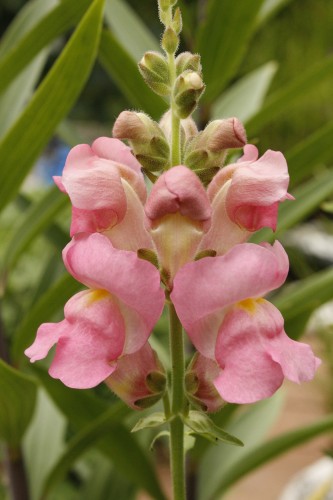 Article Name
The Long History of Snapdragons as Cut Flowers
Description
Snapdragons have been a popular cut flower for thousands of years. Snapdragons have long been highly regarded for both their beauty and the legends that accompanied them.
Author
Margarette M.

A History of Flowers as Gifts