It may be typical for dads to be the ones buying flowers for a special occasion, but this Father’s Day, let him experience the joy of receiving them with these 3 fantastic flower choices. He’ll be delighted by these outstanding stems and will finally have a chance to see what all the fuss is about. 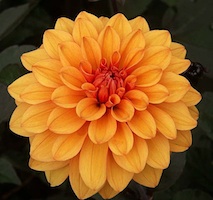 Dahlias are like daisies on steroids. With over 36 different species and hundreds of hybrids to choose from, there are some whose blooms reach over 6 inches in diameter (Dinnerplate Dahlias) and some so dainty you could sew them on as buttons. This brightly-colored flower in native to Mexico and Central America, where it was eaten by Aztecs for medicinal purposes, who also used the hollow stems as pipes. Brought back to Europe by the Spanish, the original single-petaled dahlia was cultivated to include a variety of color around a central, yellow center. Grown throughout Europe as a popular garden plant grown in landscapes for cut flowers, the dahlia came to the rescue in 19th century France when potato crops failed and garden dahlias were dug up for dinner. In the later 19th century, the dahlia’s versatility grew and soon new double-petaled varieties were developed. The dahlias of today are show-stoppers, with architecturally complex arrangements of multicolored petals. Even if your dad isn’t much of a flower guy, a bouquet or potted dahlia for the garden will be a delight.

Downright funky, the trailing fuchsia is one of the most interesting flowers your could possibly hang on your porch. Best in hanging baskets that have partial shade (think under an awning or covered patio), the ruffled folds of a fuchsia flower are fairy tale like with their long filaments and often starkly opposed color schemes. “Discovered” on the Caribbean island of Hispanola (present day Dominican Republic and Haiti), the fuchsia set horticultural hearts a twitter as several other species were found in other parts of the world. Hardy, to some degree, as a shrub, your florist will most likely have these in hanging baskets or in planted containers as annual flowers. For fathers who enjoy a nice sit on the porch come afternoon, you couldn’t pick a finer flower for Father’s Day than fuchsia. 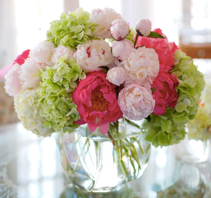 It was probably your grandmother who loved the peony best, but these large, lush blooms are the perfect pick for pop, too. A vase full of these June bloomers will remind him of the carefree summers of his youth and will be at their prime right around Father’s Day.

The Dignified Dahlia and its Many Messages

Delphiniums for Dad- the perfect flowers for Father’s Day