Horseheal, also known as wild sunflower, scabwort, and botanically referred to as elecampagne, or inula helenium, is a flowering plant belonging to the sunflower family.

It is native to Asia, and Europe, but is now naturalized in most regions around the globe including North America. Horseheal’s spread was mainly because it is considered an ornamental plant due to its bright flowers. In addition, its herbal value also played a part in its spreading.

Horseheal is a bristly, perennial plant that grows in damp meadows, abandoned fields, and roadsides. It thrives in damp conditions especially in fertile, loamy soils with sufficient drainage. The plant has alternate, pointed leaves featuring toothed margins. Its blossoms resemble miniature sunflowers with multiple, notched rays. The flowers come forth in July and August.

The name helenium is said to have originated from popular Greek folklore holding that Helen of Troy carried these flowers when she was captured. According to the folklore, horseheal flowers would sprout up on the ground her tears fell on.

Wild sunflower has always been a highly regarded herbal remedy and is constantly used and mentioned in Ayurvedic as well as Chinese medicine. In its heydays, the plant was listed in the US Pharmacopeia and was commonly used to make cough syrups and lozenges. In addition, ancient Greek and Roman physicians widely prescribed the plant for various ailments.

Scabwort was named horseheal because it was commonly used to treat horses before the advent of modern medicine. During this period, animal health practitioners used the plant to treat pulmonary conditions in horses. It was also used to treat scabs in sheep, hence the name scabwort. Basically, the parts of horseheal considered medicinal are the roots and flowers.

Modern studies have confirmed that horseheal does indeed contain medicinal properties just as ancient herbalists and physicians believed. Extracts from the flowers and roots of the plant have been shown to have bacteria-inhibiting properties. Studies have discovered that elecampagne is highly effective in killing staphylococcus aureus, a bacteria that causes various infections including pneumonia and has become resistant to most standard antibiotics.

Respiratory health
Horseheal is known to be highly effective in treating most of the common respiratory problems including cold, bronchitis, asthma and congestion. It has volatile oils with expectorant and warming qualities which make it effective in decongesting airways and soothing coughs. Horseheal is also one of the plants that have been shown to have the potential in treating tuberculosis effectively.

Good for gastrointestinal health
Elecampane is used to stimulate the digestive system due to the presence of a bitter compound known as helenin. It is also commonly used to eliminate intestinal worms and parasites as it contains alantolactone.

Horseheal is almost the perfect flower to have in your garden. It will bring you some cheer and help in keeping you and your pets healthy. 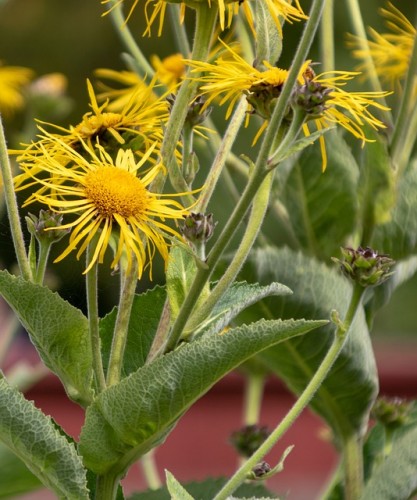