Protea repens, also known as the common sugarbush, true sugarbush or sugarbush, is an evergreen flowering shrub belonging to the protea genus. It is native to South Africa and highly popular around the world. In the US, the shrub mostly grows in plant hardiness zones 8 to 11.

Sugarbushes thrive in sunny places. They are easy to grow, highly tolerant and will grow in poor soils. Common sugarbushes can be propagated via seeds or cuttings. These shrubs are grown for their ornamental value as they have colorful flowers that bloom for long periods and for their sweet nectar.

The sugarbush was among the first plant in the genus described by the Swedish physician and botanist, Carl Linnaeus. For years, the plant was known as protea mellifera, meaning honey-bearing plant due to its high nectar content. Carl described it as protea repens, meaning the creeping protea, which was erroneous. The Swedish botanist named the plant based on Herman Boerhaave’s illustrations which were wrong.

Boerhaave, a Dutch physician, chemist and botanist had two different illustrations: one showing protea repens and the other of a creeping species. Carl based his description on the creeping plant, hence the name repens, for a creeper. Even when the older name was discovered, it was never restored to the sugarbush. The name repens is misleading because the sugarbush is not a creeping shrub but an upright, branched plant.

The common sugarbush features leathery, elongated leaves and produces brightly colored flowers in white, red and pink hues. Its blossoms are large and highly sought after in the flower industry. The common sugarbush was the national flower of South Africa for more than 200 years until it was replaced in the mid-70s.

True sugarbush’s nectar is commonly referred to as honey. A single flower head can yield as much as one teaspoon of sweet nectar. More nectar can be obtained during the rainy season when fluid nectar pours out of the flowerheads when shaken. While the plant’s nectar was first discovered in the 1600s, its medicinal use was documented much later in 1781.

Initially, the sticky sugary liquid was collected by harvesting the flowers and shaking the nectar into a jar. The resulting amber nectar was eaten raw or poured into a pan and brought to a simmer until it formed a thick, ruby-colored syrup which was used as a sugar substitute. This explains how the plant got the name “sugarbush”. The syrup was also used to make a herbal remedy known as bossiestroop for treating chest problems including coughs. Unfortunately, the art of making bossiestroop was lost in the 1900s.

There are few plants as famous and beloved as the common sugarbush. It is therefore no surprise that Cape town band leader while on picnic among sugarbushes, composed the world-famous hit “Sugarbush, I want you”. 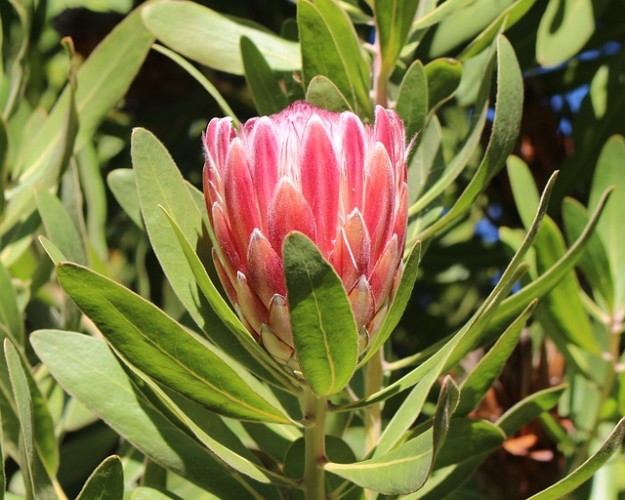 Article Name
Common sugarbush, the honey flower
Description
Protea repens, also known as the common sugarbush, true sugarbush or sugarbush, is an evergreen flowering shrub belonging to the protea genus. It is native to South Africa and highly popular around the world. In the US, the shrub mostly grows in plant hardiness zones 8 to 11.
Author
Ephy