Delphinium and Larkspur Send a Message of Heroism

The statuesque delphinium is easily recognizable for its tall spike of five-petaled flowers. One of the birth flowers for July, these flowers are named for the Latin word for dolphin and their history goes back several thousand years.

Ancient folklore tells us that the first delphinium flowers sprouted from the blood of the Greek warrior Ajax. It was also used on ancient battlefields to prevent lice and to help in healing wounds. The blue flowers came to represent truth and protection. These traditions led to the association of delphinium with heroism, making them an excellent gift for first responders and those in military service.

While delphinium have been used to treat surface wounds, they contain toxins that are harmful to humans and most domestic animals. They should not be ingested and may cause a rash if handled without gloves.

These toxins have been advantageous in repelling unwanted pests such as scorpions and snakes. The delphinine toxins discourage rabbits and deer from nibbling on the plants. For centuries the flowers were also thought to repel witches and ghosts.

The most common colors of delphinium are blues and shades of indigo or purple. There are several hundred varieties that also include white and pink hues. The dried flowers have long been used to create a purplish-blue dye for fabrics as well as a blue ink.

Delphinium are commonly thought to be the same as larkspur but, in fact, there are several marked differences. While closely related, larkspur are annuals, dying at the end of the growing season, whereas delphinium are perennials. They will return year after year when planted in a well-drained, sunny spot in the garden.

Delphinium stems are tightly packed with numerous flowers, while larkspur flowers have a much less dense growth habit. Larkspur flowers each have one petal that forms a spike, resembling a spur, but delphinium flowers lack this.

Both larkspur and delphinium were popular as cut flowers in the Victorian era, where they symbolized love and levity. They remain popular in the garden today thanks in part to their ability to attract bees and butterflies.

While these elegant flowers have had happy, positive connotations for hundreds of years, the larkspur is referenced in morose poetry by both Alfred Lord Tennyson (Maud) and T. S. Eliot (Ash Wednesday). Perhaps these poets found the blue flowers to be somber rather than cheerful.

Lasting up to two weeks once cut, a gift of delphinium or larkspur won’t soon be forgotten. Whether you use them to represent heroism or levity, these bold flowers make a powerful statement. 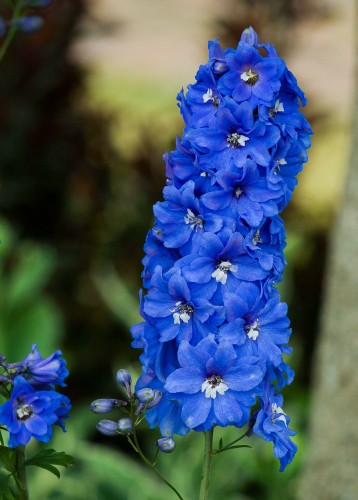 Article Name
Delphinium and Larkspur Send a Message of Heroism
Description
The statuesque delphinium is easily recognizable for its tall spike of five-petaled flowers. One of the birth flowers for July, these flowers are named for the Latin word for dolphin and their history goes back several thousand years.
Author
Margarette M.