Barbarea vulgaris, commonly known as yellow rocketcress, wintercress, rocketcress, bittercress, or herb Barbara, is a biennial plant in the cruciferae family that is native to North Africa and Eurasia. The herb Barbara was brought to the US and soon became a noxious weed as it spread by getting concealed among alfalfa and clover seeds.

The plant’s genus name, barbarea, is borrowed from Saint Barbara, an early Greek saint and martyr considered as the patron saint of miners and artillerymen. The association with mining and artillery is due to the plant’s medicinal ability to soothe and heal wounds caused by explosions. The second name of the plant, vulgaris, is a Latin name meaning “common”. Bittercress is also known as wintercress because it can withstand cold winters and can be harvested under the snow.

Rocketcress is normally gathered from the wild for medicinal and food purposes. However, it is also cultivated as an ornamental plant for its beautiful golden flowers and as a salad crop.

Yellow rocketcress occurs in damp lowlands such as stream or riverbanks, and ditches. The plant also occurs in disturbed places, wastelands, abandoned gardens, and rocky outcrops. It thrives in sandy, clay and siliceous soils but rarely grows in acidic places.

The plant’s leaves have dark green, wavy and glossy leaves. It produces golden-yellow flowers in a cluster from April to July featuring four petals in keeping with the character of the cruciferous family.

Bittercress’ leaves, flowers, and stems are edible. These can be chopped and cooked like broccoli or spinach. They can also be tossed into salads while the flowers are perfect for garnishing. The plant has a spicy, sharp, mildly peppery flavor attributed to its high levels of mustard oil.

Yellow rocketcress leaves and flowers can be dried and stored for later use but they lose their peppery flavor; in their dry form, they are ideal for medicinal use.

The plant is high in vitamins B and C. Curiously, yellow rocketcress flowers are known to contain protein. Bittercress also contains decent amounts of calcium and potassium. With so much going for the plant, it is not surprising that wintercress is considered a medicinal plant with blood purifying qualities. In addition, its bitter properties make it ideal for promoting the metabolic and digestive processes.

The Yellow rocketcress is used as a remedy for respiratory tract problems including the common cold. To make the remedy, the aerial parts of the plant are infused and the resulting mixture taken orally as a tea. In addition, bittercress is crushed to make a poultice which is applied to injuries.

So, the yellow rocketcress not only has a cool name but it also tastes good and can help to improve your health. 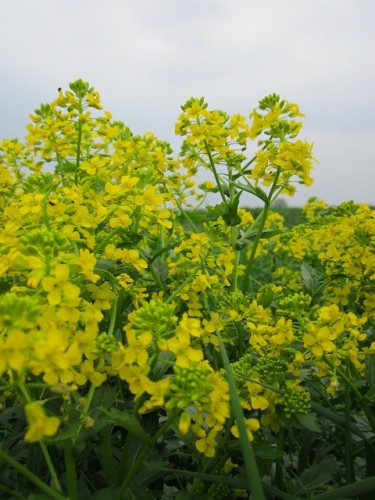 Article Name
Yellow Rocketcress: The Nutrient-dense Herbal With a Cool Name
Description
Barbarea vulgaris, commonly known as yellow rocketcress, wintercress, rocketcress, bittercress, or herb Barbara, is a biennial plant in the cruciferae family that is native to North Africa and Eurasia. The herb Barbara was brought to the US and soon became a noxious weed as it spread by getting concealed among alfalfa and clover seeds.
Author
Ephy

Cool Desserts with a Floral Twist