Grecian foxglove, botanically known as digitalis lanata, is a beautiful, short-lived perennial or biennial flowering plant. It is native to Europe and was brought to the US as an ornamental herb due to its beautiful blossoms that are ideal for the cut flower industry.

The plant looks similar to garden foxglove (digitalis purpurea), however, you can distinguish it from the latter by the wool-like hair on its sepals and stems. In addition, grecian foxglove has green petals surrounding the flower bud as well as multi-colored blossoms unlike its cousin, the garden foxglove.

Between June and July, grecian foxglove produces flowers which occur on an erect, unbranched stalk. The white to pale yellow flowers are tightly arranged along a spike-like raceme and face different directions.

Grecian foxglove’s genus, digitalis, comprise of more than 20 species. All the plants in the genus contain cardiac glycosides known as digitalin (digoxin) and digitoxin. These cardiotonic substances are toxic in large quantities but beneficial for people with heart problems in small quantities.

According to a report published in the Journal of Clinical Pharmacology, William Withering, an English physician, is credited with the first recorded use of foxglove extracts derived from digitalis purpurea to treat edema. This is a condition closely linked to cardiovascular problems.

Basically, the cardiac glycosides that are used to treat heart conditions are extracted from any part of grecian foxglove. These compounds have been shown to be highly effective in atrioventricular conduction which effectively slows down the heartbeat but mildly increases its contracting ability. The enhanced circulation in congestive heart failure resulting from fast atrial fibrillation helps the kidneys to function better and stimulates urine flow. This has the effect of reducing the blood volume which has the effect of taking off the strain from the heart.

While there are possibilities of new drugs for treating heart conditions emerging and replacing the grecian foxglove, this plant will always occupy an esteemed place in the medical world. 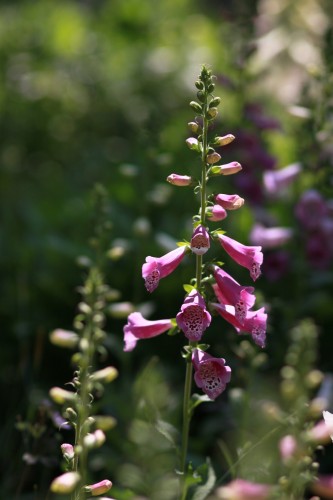 Article Name
Grecian foxglove, the heart friendly wildflower
Description
Grecian foxglove, botanically known as digitalis lanata, is a beautiful, short-lived perennial or biennial flowering plant. It is native to Europe and was brought to the US as an ornamental herb due to its beautiful blossoms that are ideal for the cut flower industry.
Author
Ephy

Hawthorn: A Heart-friendly Symbol Of Love